IN MEMORY OF BRIAN “OTTO” TRACY 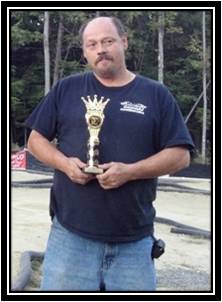 On April 27th, 2013 Granite Leisure Time, the R/C community, and the world lost an amazing man, Brian “Otto” Tracy. Otto has touched many peoples’ hearts and he will be missed by many. I could go on and on for pages about the amazing Otto and all he did, many will attest to this. As some of you may know, Otto contributed in many ways at GLT. He built many of our jumps, the wall ride, and the rollers. He made many decals to display company specific sections at the store. He also made many decals for customers and friends. In addition, he made numerous signs, stickers, banners, and sandwich boards for GLT to advertise with. The line-up boards on both the indoor and outdoor tracks were created and put up by Otto. The GLT logo on the main entrance to the indoor raceway is another one of Otto’s great creations. Otto was always willing to lend someone a hand to share his love of the hobby. I’m not sure if he liked creating decals or the r/c hobby more. Otto had a heart of gold and would go to any length to help someone no matter what the cause was. He did love his motorcycles as well; he has helped many of us with these, too!

Otto loved GLT and we loved Otto. We will miss you Otto!

OAKLAND — Brian “Otto” Tracy, 53, died Saturday, April 27, 2013, at the MaineGeneral Medical Center in Augusta.He was born in Waterville on December 20, 1959, the son of Clarence and Anne (Luce) Tracy. Brian attended local schools, graduating from Messalonskee High School.Otto was employed as a mechanic over 10 years by The Starting Line in Waterville and for the past 5 years at North Country Power Sports on Kennedy Memorial Drive in Oakland. He loved to ride motorcycles and was a member of the United Bikers of Maine. He enjoyed their rides and outings, including participation in the annual Toy Runs.Otto was a lifelong resident of Oakland. He was a remote car enthusiast, spending enjoyable hours at Granite Leisure Time.Besides his father, he was predeceased by a brother, Harold Tracy, and a sister, Donna Tracy Bouchard. Surviving are his mother of Oakland, a sister, Elizabeth Sheehan, of Oakland, a brother, Dana Tracy and wife, Loretta, of Mercer, a special friend, Nancy Fortin, of China, several nieces, nephews and cousins.

IN MEMORY OF KEVIN L. TOZIER

NEWPORT — Kevin L. Tozier, 55, died Aug. 20, 2010, at a Pittsfield hospital after a short but valiant battle with cancer. He was born June 14, 1955, in Lincoln, a son of Claude and Muriel (Chase) Tozier II. Kevin graduated from Nokomis Regional High and worked as a mechanic at T & W Garage on Elm Street in Newport. At the time of his death, he co-owned the business with his wife Carol and brother Michael.He will be remembered as a wonderful person who put everyone else ahead of himself. His hobbies included golfing, traveling, remote controlled cars and airplanes, and woodworking. He will also be remembered for the manyhope chests, rolling pins, and other items he made for friends and family.Kevin loved to go four-wheeling and also loved to show off and operate his tow trucks. He will be remembered by those who love him as their “MacGyver.”He is survived by his wife Carol (Morton) Tozier of Newport; two daughters, Lisa Tozier of Malden, Mass., and Heather Tozier of Palmyra; four brothers, Claude Tozier III of Canaan, Reginald and wife Stacey Tozier of Portland, Tenn., Kim and wife Julie Tozier of Passadumkeag and Michael and wife Jodi Tozier of Newport; two sisters, Patricia and husband Danny Sprague of Charleston, and Margaret Parker of Stetson; three grandchildren, Rachael and Austin Tozier and Xavier Rowe; a number of nieces, nephews, many, many special friends, and loyal and loved employees.

IN MEMORY OF  RICKY C. AKERS

WATERVILLE–Ricky C. Akers, 41, of Vassalboro passed away peacefully at MaineGeneral Medical Center in Waterville on Friday evening, Dec. 30, 2011, after a long and courageous battle with many illnesses. Ricky resided in Vassalboro his entire life, and was a 1989 graduate of Winslow High School. At the time of his passing, Ricky was surrounded by his family and friends who are all very grateful Ricky has found peace. Ricky is and will always be a loyal and loving son, brother, uncle and friend who will be greatly missed.Ricky was an avid computer enthusiast who enjoyed collecting, building and racing radio-controlled cars. He loved participating in and watching all types of sports, particularly football, baseball and hockey. Most of all, Ricky enjoyed spending time with his family and friends and was always willing to help and support them whenever needed.Ricky is survived by his mother and father, Laurel (Abbott) and Jesse Akers of Vassalboro; his brother, Michael; sister-in-law Charlene; and nephew Matthew Akers, of Belgrade. He also leaves many aunts, uncles, cousins and life-long friends. Ricky will be sadly missed and fondly remembered, but most of all, to really know him is to love him.

IN MEMORY OF ROB S. AHLGREN

WINSLOW — Robert S. Ahlgren, 41, passed away unexpectedly Wednesday, Oct. 5, 2011, at MaineGeneral Medical Center in Waterville.He was born in Trenton, N.J., on April 10, 1970, the son of Fred and Mary (Kinczel) Ahlgren. Robert grew up in the Trenton area, graduating from Central High School. Moving to Maine, he worked many years at the Oakland transfer station. At the time of his death, Robert was employed in the maintenance department at the Woodlands in Waterville.One of Robert’s passions was roading. He belonged to the Western Maine Mountain Jeepers Club. He enjoyed spending time at Granite Leisure Time ,where he was a R.C. Truck hobbyist. One of his favorite activities was attending Cub Scout meetings with his son.Surviving are his wife, Tasha (Kitchin) Ahlgren, of Winslow; his father, Fred Ahlgren, of Belgrade; his children, Julien, Tabetha and William, of Winslow; sisters Sandra Morris of Flemington, N.J., and Deborah Halsted of Littleton, Colo. Robert had many friends including his life-long friends Wayne Stangil and Scott DuBets, his closest friend Mike Robinson, and special Jeepers Club members Ron and Bonnie Livingston.